The simulator is ready for BfA for all specs, including tanks and healers, and all of the Azerite powers. It’s still on beta.askmrrobot.com because it hasn’t been tested enough. So don’t take results as concrete “facts”!

It’s also worth noting that Artifacts and Legendary effects are disabled in the BfA simulator since they won’t work for level 120 characters.

“Single Simulations” are fully functional. That includes all of the following:

Simulate on the beta

Go to beta.askmrrobot.com to simulate.

Follow the steps (choosing “Single Sim” in step 1, as that’s the only one currently enabled.

If you want to pick Azerite powers, make sure the Heart of Azeroth is set to a high enough level. I suggest 33, as that’s the highest unlock requirement right now.

To equip Azerite gear, click on any item to browse the list. Use the search box at the top of the list to search for a specific Azerite power by name. 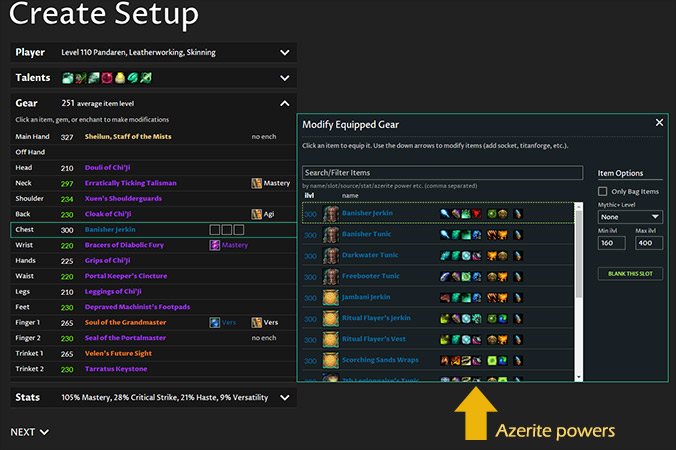 Once you select an Azerite item, it will be equipped. Then blank boxes will appear next to it, indicating no Azerite powers have been picked. Click on the boxes to select your Azerite powers. The picker looks like this: 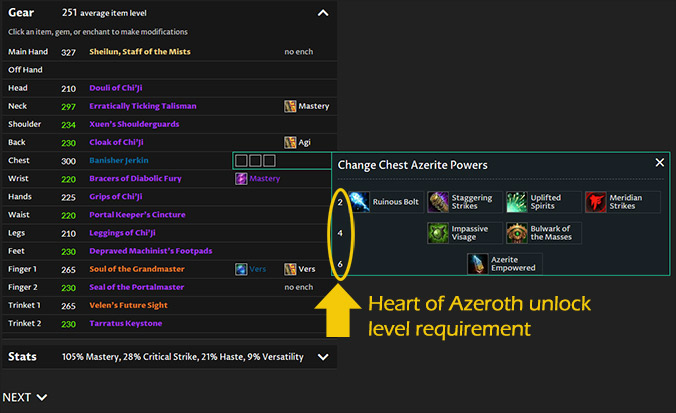 Continue through the next setup steps, then click the simulator button when you are ready. The menu on the far left (it has a white background) will have a history of your simulations, as well as a link to the Theorycraft Wiki.

More about the wiki:

Simulator schmimulator. The wiki is the real workhorse.

Browse the wiki for your spec.

What is not ready?

Batch simulations and other ‘comparison’ type of simulations are currently disabled. We’ll have those up and running again soon.

If you see anything odd, or get an error, post on the forums. Be sure to include a link to the report that gave you an error, or caused a problem. Also, *hugs* for taking the time to report any problems.