Dailies, assaults, visions, emissaries, islands, missions, dungeons, raids… dang dude, that’s a lot of stuff. So what do you really have to be doing to keep your character caught up and raid ready?

This little guide is not targeted at people who have time to play WoW for 4+ hours every day. This is targeted at the WoW player who wants to raid or do Mythic+ two or three times a week with their team, and that’s it! (Or maybe you want to play more, but life gets in the way.) We will also target this at players who aren’t interested in putting in a lot of time to get cosmetic rewards such as mounts. We’ll order it by activity, and do an analysis of the time vs. reward for each.

(There’s also an infographic summarizing everything at the end of the post).

This post was updated Jan 22 with the changes for amount of Coalescing Visions earned from Minor Horrific Visions (1500, up from 1000) and dailies (250 each, up from 50).

Each week there is a “major” assault that you can do which gives you a cache that has a Vessel key in it for a Horrific vision.

You can also do two “minor” assaults. The minor assault resets on Tuesday and then again on Friday night, rewarding 5,500 Coalescing Visions each. The location will rotate between Uldum and the Vale of Eternal Blossoms, and will show up on your map.

These are worth doing. They don’t take very long, you don’t need to do them every day, and they essentially reward 2 keys (a key from the Major and a total of 11k Coalescing Visions from the minor).

Each day, there is a “minor” horrific vision that you can do. The first week it was in the Vale of Eternal Blossoms. It shows up on your map, and looks like a pillar with a quest-giver near it with a blue/daily quest to go inside and do a simple objective like kill enemies, rescue people, or close portals. You can do this once a day and it rewards   1500 Coalescing Visions, 3000 for the first one each week.

These are worth doing. It usually takes less than 5 minutes.

You will also average around 3500 reputation with each faction per week if you do every assault and every daily quest. This means that it will take you roughly 5 weeks to reach revered with each faction. (Note that some people could certainly do it faster in calendar time, but it will require many hours of extra farming of the zones — out of the scope for the type of player we’re talking about in this guide.)

The only interesting rewards (in terms of raiding) for reaching revered are rank 3 of the essences Breath of the Dying, Spirit of Preservation, and Touch of the Everlasting.

A person who is pretty efficient about doing daily quests can finish them in around 20-30 minutes for each zone, depending on the quests that day. So plan around 40-60 minutes per day, or 4.5-7 hours per week. To put this in terms of rewards:

Without doing these dailies, you can earn enough Coalescing Visions to do 3.3 Horrific Visions each week for a total of about 2.5 hours of play… so roughly 45 minutes of play to earn enough to do a vision via assaults and the very short “minor” vision quest… having to spend 3-5 hours to get another vision is not a great use of your time.

12-18 hours of total play time to upgrade an essence from Rank 2 to Rank 3 is also not a great use of your time. At best, you are looking at a 1-2% increase in DPS or tanking/healing performance, given that you will have other good Rank 3 essence alternatives.

Dailies are not worth doing. It’s that simple — just skip them entirely if you don’t feel like doing them! You will be able to keep up just fine without them.

Some other activities are still worth your time:

Any other emissary or world quests are not a good use of time. Doing islands other than for the weekly reward is also a bad use of your time.

This is a lot of stuff… so if you want to save more of your time, skip islands entirely, and skip any emissary quest that is not artifact power.

These are important and you should do them!

This is a new activity in 8.3, can’t miss them if you do the main story quests. There has been quite a bit of “stress” about these after the first week because the number of times you can attempt them is limited by how many Coalescing Visions you get. If you fail, you don’t get any reward, and you just wasted 10,000 of your Coalescing Visions. But as of January 22nd, Blizzard increased the amount of CV you earn from various activities so failing isn’t nearly as punishing.

If you do the activities above without dailies, you will end up with essentially 33,000 Coalescing Visions per week (23k from activities and 1 key from the major assault). That’s 3 keys a week and that feels much more flexible. If you fail a key, you can now farm dailies for the week to earn a key back.

Horrific Visions have the following rewards:

Wrathion gives you quests to upgrade your legendary cloak. This is important! It is the only way to increase your corruption resistance, which is very important for increasing your power this patch. Each quest will tell you what to do in the Horrific Vision.

You can only reach Rank 6 up until Jan 21st (when the raid starts). After that, you will be able to increase your cloak one rank each week, up to Rank 15. This is why you don’t need to worry too much if you failed once or twice: you’ll be able to do more Horrific Visions than are required to rank up your cloak.

Gear drops from the chests at the end of a Horrific Vision. You get better gear for completing more objectives, and eventually doing the Horrific Vision with “masks” activated. For the target audience of this guide (someone who wants to raid), the gear is not worth worrying about until you can clear all 5 objectives. That will drop ilvl445 gear. After that, each Faceless Mask activated will increase gear rewards by 5 item levels.

Blizzard posted all of the gear levels on their forum in this post: Horrific Visions Rewards.

You get items to upgrade Spark of Inspiration, Unwavering Ward, and Strength of the Warden in Horrific Visions. You’ll get rank 2 pretty quickly without worrying about it, but rank 3 will take a bit longer. If you can full-clear all 5 objectives, you can get to rank 3 faster.

Optimal Use of Coalescing Visions

The number of Horrific Visions you can run each week is extremely limited, so you want to make the best use of them to upgrade your cloak.

*Since Blizzard increased the amount of Coalescing Visions you can earn from the daily Horrific Vision (1500, up from 1000) and dailies (250 each, up from 50), you can now earn enough to get spare keys. This allows you to do extra runs for Mementos or Gear.

Rule 2: never use a mask unless you are 100% confident that you can complete the objectives needed for your cloak quests.

Next, you want to ensure maximum progress when you do run a Horrific Vision:

If you are doing only the time-efficient activities suggested above, you would earn 23k Coalescing Visions each week plus 1 key from the Major Assault. Here is what “perfect” progress would look like in terms of the runs required to max your Cloak’s rank for the week, the rank of your cloak, and the remaining resources.

(see infographic below for a nice chart of this data)

This is a lot of data and to make it a bit more fun to read, we put together an infographic (click for full size). 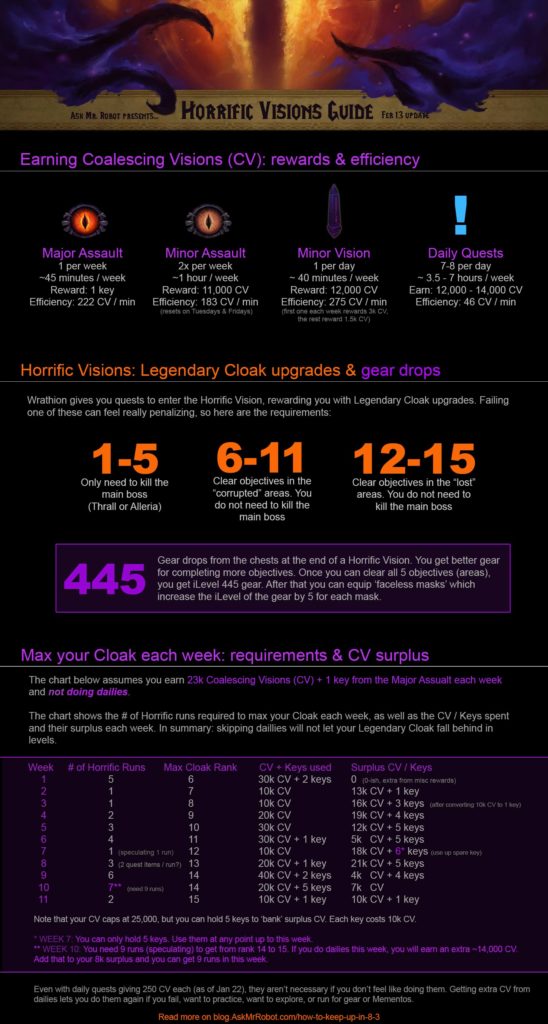 8.3 Corrupted Gear: How it Works & What to Wear