[su_note note_color=”#fcf385″]If you do Best in Bags and see a giant score % increase, it has to do with caching. Also, your Artifact weapon might not show as the right iLevel until you reimport from the addon when the game is back up. I have instructions on how to fix these things here. [/su_note]

Pre-patches… oh how things always seem like they’re spinning out of control!

Players are dying to know what’s good and what’s bad. Content creators want to provide the answers, but struggle with the problem that the power of individual talents and spells are still in flux.

A few early opinions start to form which get morphed into black-and-white statements like “This class sucks,” and “This class is so overpowered.” People start switching mains and worrying if they’ve made the right decision.

I think a lot of the stress everyone feels comes from the uncertainty. As players, we are used to having so many tools to evaluate every little thing about World of Warcraft, from simulators, to combat logs, to expert opinions.

We really have none of that right now, we’re flying blind. You can’t get reliable logs for a level 120 right now (I know, Captain Obvious over here). 110 logs are almost unusable since BfA is really tuned around 120. Simulators, while equipped with BfA data, aren’t as tested as we are all used to (both AMR and SimC). And class experts have only had a cursory glance of what things might feel like at max level on the beta.

Also, the game is still being balanced. So this all seems a bit silly.

Instead of worrying about what’s ‘best’ during the pre-patch, I suggest an alternative: experiment and have fun.

Do things just for the hell of it.

Try a new talent build every day. Fun fact: depending on the spec, there are anywhere from 20 to 200 talent combos that make sense to try. Or try a legendary that might be super powerful because it hasn’t been balanced with how it interacts with a new talent (the pre-patch lets you buy specific legendaries). Try a crazy new rotation. Or stop focusing on your rotation to master the ‘stutter step’ (moving only while you wait for the global cooldown).

Swap main and off tank roles so the offtank has more opportunities to learn. Try using less healers on a boss – it’s fun and it’s a learning experience, I promise (read about my healing experiment  where one healer was also playing Hearthstone. It’s from last expansion, but still relevant).

The stakes are low right now, which makes it perfect for experimentation. Do ALL the things!

What about pre-patch gear optimization?

We have the same problem that players do in game – things are still being balanced. On top of that, they are being balanced for 120, not 110. So optimizing at 110 gets a bit out of whack.

Here’s a few fun facts for you:

Even though things are a little crazy during the pre-patch, we know you still want to rank gear. We have one problem to address when it comes to gear ranking. Our Adaptive Gearing Strategies change ‘stat weights’ and legendary and trinket recommendations as you get new gear, and as you change talents. This is possible because it is based off of simulations for all of the talent and gear combos you could get.

To make that work, we have to run a lot of simulations. So many, that it takes 2 weeks to run all of the ones we need, across thousands of computing cores. So running these for such a short pre-patch that rapidly changes, isn’t practical.

Instead, we have a hybrid solution – which is fitting since the pre-patch is also a hybrid between Legion and BfA. We’ll be using simulations based off a generic character (instead of simulations based on your character). Then we’ve also beefed up the manual customization options, so that manually editing stat weights and trinket/legendary rankings is easier.

In the spirit of having fun, experiment with gear and different stat combinations. How does high Crit feel? How does high Haste feel? You get the idea.

How to customize the stat weights and item rankings

To lock an item in:

You can also customize the stat weights and any gear ranking:

2. In the menu that opens, click the green “Create a Custom Strategy” button as shown above. 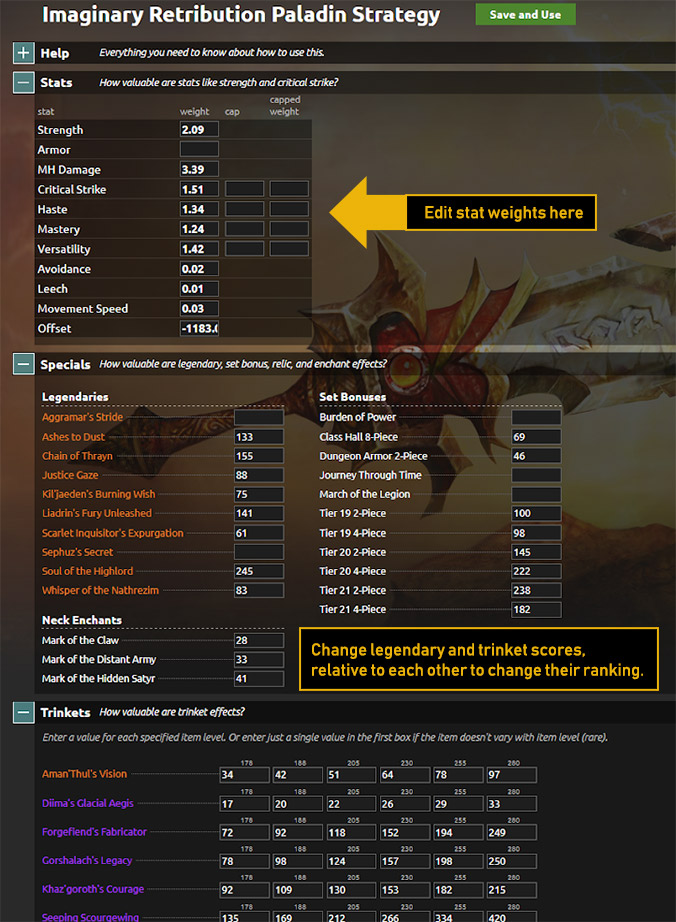 3. This shows the customize screen which has stat weights and values for each trinket and legendary already filled in. You can customize any portion of that.

BfA: Back to your regularly scheduled programming

Once BfA launches, we’ll all get serious again. Fast leveling. Farming gear for when the raid opens. Optimizing Azerite powers. Doing ALL the things.

Most importantly, gear rankings will be based on sims custom to you again (called Adaptive Gearing Strategies). It might take a couple of weeks to get them fully adaptive because of the sheer amount of simulations required.

Mr. Robot runs simulations of every relevant combination of talents, gear, and Azerite powers that you can get in BfA. He then uses data from alllll of those simulations to rank your gear. As you get new gear or change talents, Mr. Robot looks at the appropriate sim-data and adapts his recommendations to your new setup. I know, you never have to run ‘stat weights’ again and it is awesome.

I have a full timeline for BfA, if you are interested.

Also, if you have a good computer and want to join the GloNet to help with the Adaptive Gearing Strategies (and get them done faster), sign up for our GloNet-only email to be notified when we are ready to start running those simulations. The emails will be only about the GloNet, no marketing or anything else.

Mr. Robot’s BfA Timeline Pre-patch issues & how to fix them