All of the new BfA talents are here with the pre-patch, and our shiny new gear is soooo close.

You’re probably wondering when you can play with those on our site. Or maybe not.  Maybe you are in game having too much fun to worry about optimization (that’s my advice!).

Still, it would be nice to know what to expect on our site, and when, right? Here’s a TLDR and image that covers the basics. 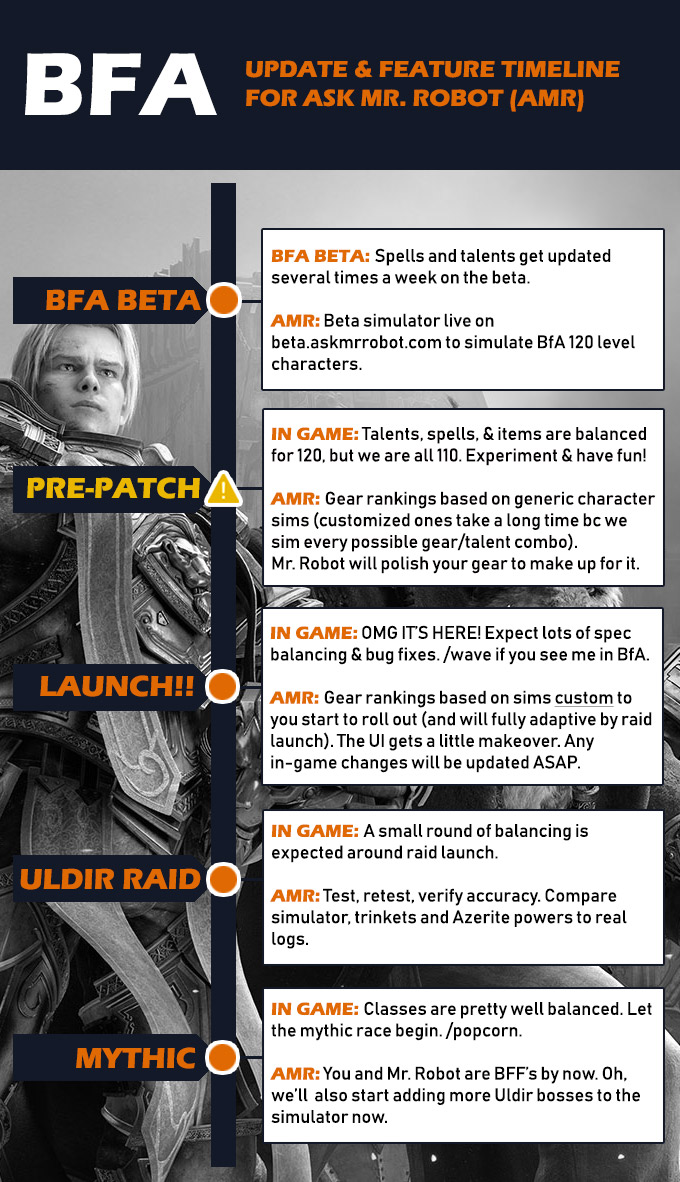 We have a  beta version of the BfA simulator live on beta.askmrrobot.com. This replaces the Legion simulator, which is now retired.

The beta simulator is on the beta domain for a good reason: this is the ‘implementation’ pass – where we get everything implemented with some in-game testing. Then we do real testing on it to find anything that isn’t correctly modeling the game. We won’t move it over to the main site domain until we are confident in the quality.

If you are looking to browse talents and gear for BfA, you can do that on the beta simulator page. I have a few tips:

Note: even though we’ve tried to ensure accuracy with in-game testing on the Beta servers, we aren’t able to double and triple check the data against the live game and logs. If you see a bug, let us know (on our forums). Since we fix bugs within 24 hours, if you found one, it’s likely we don’t know about it.

Expansion pre-patches are always chaotic for a site like ours, for a number of reasons:

On top of that, our Adaptive Gearing Strategies (the evolution of ‘stat weights’) take a lot of time and money to run. In order to create them, we run every relevant combination of talents and gear that you might get at any point during BfA and Uldir (the first raid).

We have to do this for every spec, for all the talents and gear, so we can make sure it is custom to your character and your preferences. This is why you no longer have to ‘sim’ every time your gear changes – we’ve already done it for you. It takes about 2 weeks (across thousands of computing cores) to complete the simulations necessary to customize gear for every character.

Some of the computing power is from people like you, who let us use their computer when they aren’t, and the rest we pay for so we can get these done in a reasonable amount of time. (If you want to help by contributing with your computer, sign up to be notified by email – you will ONLY get emails about that topic, nothing else).

Anyway, I’m getting to my point, promise!

During the pre-patch, our gear recommendations will be based on simulations for a generic character, not custom to you. The advice we give you will be good enough, but it won’t be as customized as we usually give you. So we’ve improved the system that lets you manually edit stat weights and trinket/legendary rankings, in an effort to make that easier for you to use.

You might find legendary and trinket rankings are different than what you prefer with this temporary hybrid solution. My recommendation is to lock in your favored items and Mr. Robot will optimize around that.

Once BfA launches, we will be back to giving you custom recommendations based on Adaptive Gearing Strategies again. And thanks for your understanding. This is where I wish we were psychic and knew what changes would be coming.

During the pre-patch, we’ll start running simulations that will calculate the customized Gearing Strategies that adapt to you. We’ll roll them out after BfA launches and update them as balance patches happen.

We fully expect to see a few tuning changes on launch. When those happen, we’ll update our simulator and recalculate gear recommendations that it affects.

As you get to max level, I advise you to keep all of your trinkets and items, as gear recommendations will likely change over the next several weeks as the game gets tuned, and as we find and fix any bugs in our simulator (yes, they happen, just like bugs happen in-game).

With BfA launch, we’ll be able to start in-game tests against live data to double check accuracy of the simulator and gear recommendations.

The site will also get a little makeover. We like to do this every expansion to improve on usability. For example, locking an item in was meant to be a power-user feature in Legion, but a lot of people really liked it. So we’re making that more obvious and easier to use. We also have filters that let you control the sources of gear – if you don’t run Mythic raids, you won’t see Mythic gear. It was behind a filter icon that often went overlooked. So we’re making those more obvious as well.

I can’t wait for you all to see the new layout and to hear what you think!  The redesign also has a little surprise that we’ll be announcing soon.

Once the raid launches, we’ll be able to compare our simulator reports to real logs of top players. This lets us:

We’ve done this kind of testing in the past and will continue to do it throughout BfA. It’s helpful not only for us, but so you can have confidence in the simulator and gear rankings as well.